One of my favourite Beginner’s Bible songs was “Shadrach, Meshach and Abednego”. In the last year and a bit, the story of these men, and their friend Daniel, has really caught my attention. I want to share some the wonderful aspects of faith that marked Daniel and his friends as being set apart for God. These four men influenced kings and cities to acknowledge God.

“The Daniel Fast” is a concept that has recently been gaining popularity. Nowadays, there are even recipe books written on this! When I first decided to do a “Daniel fast”, it was during a time when I was learning what it meant to fast intentionally. I looked into the book of Daniel. The very first chapter tells us what Daniel and his friends chose to eat while in training to serve the King who had conquered their nation. More than that, it tells us what kind of culture Daniel and his friends choose to uphold.

Verses 4-7, describe some of the methods Babylon used to sway the loyalty of these new captives.

(v.4) “… young men in whom there was no blemish, but good-looking, gifted in all wisdom, possessing knowledge and quick to understand, who had ability to serve in the king’s palace, and whom they might teach the language and literature of the Chaldeans.”

(v.5) “And the king appointed for them a daily provision of the king’s delicacies and of the wine which he drank, and three years of training, so that at the end of that time they might serve before the king.”

(v.7) “To them the chief of the eunuchs gave names: he gave Daniel the name Belteshazzar; to Hananiah, Shadrach; to Mishael, Meshach’ and to Azariah, Abed-nego.” 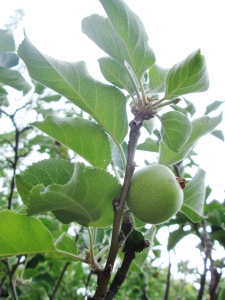 All these gestures the king made towards the young men were part of integrating them into his kingdom, and thus, swaying their loyalty. As captives, a hand of friendship seemed yet extended to them. The compromise was that they embrace their new culture, and become loyal to their new king. This pattern of temptation has been repeated time and time again through history – for example, when the Romans took over Jerusalem, and when the Ottoman Turks conquered Christian cities. These conquering nations grew as they swayed the loyalty of their new subjects – it diminished the chance of rebellion and added loyal subjects.

In the midst of all this, we are told that Daniel makes an important decision.

“But Daniel purposed in his heart that he would not defile himself with the portion of the king’s delicacies, nor with the wine which he drank; therefore he requested of the chief of eunuchs that he might not defile himself.” [Daniel 1:8]

Daniel makes a decision in his heart, and he takes action to live this out. He is not pulled away by the riches of Babylon, but remembers who he is and who his God is. He upholds the law of his God, and determines that he will pursue a life of worshipping God only, with clean hands and a clean heart.  As part of this, when faced with this situation, Daniel makes a request. He understands his situation and asks the steward over him for permission not to defile himself in this way. He listens when concern is raised regarding the risk to the steward’s life if Daniel and his friends look worse than the other men because they do not eat the good fare of the king’s table. He negotiates and asks for a trial of ten days, for the steward to then review them and to deal with them as seemed fit. Despite being in the pagan land of Babylon, Daniel still honoured his superiors. Throughout the book of Daniel, we see how Daniel’s first loyalty was to God. Yet, he also abided by the rules of the land he was in, as long as they were not contrary to God’s laws. When necessary, he appealed to his superiors – but he did so in a graceful way, not with disgust or pride. Rather, Daniel respected them as leaders of the land while also remaining strong in his faith.

In essence, Daniel fasted not only food, but also the pleasures of earth. His fast was that he chose to honour God, and all the ways of God.
It was a fasting of the heart, and fasting like that described in Isaiah 58.

“If you turn your foot away from the Sabbath, from doing your pleasure on My holy day, and call the Sabbath a delight, the holy day of the Lord honourable, and shall honour Him, not doing your own ways, nor finding your own pleasure, nor speaking your own words, then you shall delight yourself in the Lord; and I will cause you to ride on the high hills of the earth, and feed you with the heritage of Jacob your father. The mouth of the Lord has spoken.” [Isaiah 58:13-14]

At the end of the chapter, the steward finds that Daniel and his friends, having eaten vegetables and water for ten days, looked better than the rest of the young men who were eating from the king’s table. He subsequently allows Daniel and his friends to continue their diet, and abstain from eating food from the king’s table. In his decision not to eat the king’s delicacies, Daniel sets an example for the other young men of Israel, and also honours God. He testifies that his strength is found in the word and laws of his God – the God of Abraham, Isaac and Jacob.