A dream scurried past the little boy, and he turned to catch up with it. It was like a flash of sun with the fragrance of woodland park, and a faint impression of fun-filled laughter. He raced along through darkened mist, but it did not frighten him. All along, He could see the glow of that little dream, that little hope. All along, he smelt its sanctuary, and heard its strides, and knew that it would never move too far away for him to catch up. All along the Timekeeper watched, for years seemed only a minute to Him, and eternity found no boredom.

The little boy skipped through the annals of time, where basketball hoops, ovals and schoolwork slipped by. At times, he would stumble or bump into these obstacles; at times he would slip and fall backwards. At times, he grazed his knees, and at times pain would prick tears into his eyes. Yet, the little boy pressed forward still. He could not see all the things in front of him, but the light of that dream still beckoned him forward, and its music always brightened his countenance. He did not see the Timekeeper, keeping time with him, untangling the cords around his feet so he might not be pulled backwards or stuck. The Timekeeper cleared the path before him, and collected the treasure he dropped or left behind. He placed them in some special jars labelled “memories” and “reward”.

A little older now, the youth found his way was brighter, though walls and thorns rose up unexpectedly at times. He learnt to use a sword, and wielded it well so the walls were destroyed and the thorns were rendered smooth. At times he was confused, and lost his way, but the Timekeeper kept placing that sword in his path and with time, he grew accustomed to its way. Sometimes the youth grew tired, but yet he pressed on. The dream he saw now as hope, and he still knew he could reach it. The Timekeeper blew a little wind on the youth’s back. It kept him from leaning too far backwards, and quickened his forward steps.

The darkened mist appeared once again, but the boy, now a man refused to see it. He was after his hope, still untouched by the years. It glowed bright in his eyes and his hand reached out to take it closer yet. In the mist, he saw faces he had not seen before. Some struggled, some were still, and others seemed half-dead. He wondered if he could help, and a couple of times he paused to share some water or some food. Some needed blankets, others smiled at a hug. The man shook some, and they walked, but others lay limp and could not care to respond. The Timekeeper also worked hard at the chains that snapped closed around the hearts of the weary roadside travelers. Some joyfully cried at their release, but many others kept grabbing at more tangled threads. 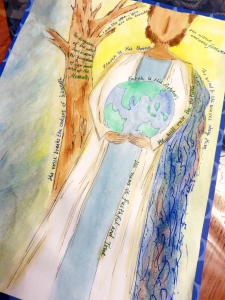 Now older and slower the man felt his years. The wrinkles in his complexion spoke decades of stories – of triumph and failure, joy and all sorrows, but most of all, of the little hope still unrelinquished. He sighed and he fell one last time toward that hope as the Timekeeper caught him in His everlasting embrace. In a moment, the burden of years was released from his body and the man was caught up in the Timekeeper’s glory. He saw that his dream and his Hope were the Truth, that the Timekeeper remained faithful from beginning to the end. There was no wrong timing, no step out of time, for there was nothing kept secret from the Timekeeper’s gaze. No days left to wander, no pains left to ponder, the man saw the Timekeeper with life in His hands. This life was used to envelop the world, a world so much meeker in the Timekeeper’s fingers.

The Timekeeper offered the palm of His hand, upon which was inscribed times from beginning to the end. The man, like a boy, raced fast toward the Timekeeper whose form was unchanged through all the times past. The Timekeeper took out jars bright, full with light – the one called “memories”, and the other “reward”. He saw the walls of the Kingdom being built high and strong, and a multitude of white robes being prepared for the people. He saw the Timekeeper weaving these robes all together, and breathing eternity into their pure pattern. The boy looked and saw his Hope now so clear, the light of love’s passion in the Timekeeper’s eyes – a love for life, for peace and for mercy. And now, the boy understood the Timekeeper’s purpose. He saw thousands of years pass in what seemed like a day, and savoured glimpses of moments for many times longer. Eternity was in the Timekeeper’s domain, and the little boy smiled as he finally touched its flame.

A light in the darkness flickered and grew. The Timekeeper spoke, and there was life to the full.