Eden is a name of emotion – beauty beyond our understanding, sin with roots and consequence entrenched in man’s being, fear of the Lord, and fervent desire for His presence. The breath of Eden radiates intimacy, curiosity, consequence, and yet promise. You can almost hear God weeping as man is exiled from His garden, and you can even more clearly hear His already-decided promise to bring them back. Eden is transformed in Revelation – no longer hidden, but revealed, no longer separated, but rejoined.

The Lord’s garden is beautiful, well-tended, well-watered and full of life. In Genesis, we see the emotion of God as He creates the expanse of the heavens and the earth, and forms the beautiful habitation of Eden. It is a home for His very best creation – mankind who is made in His image. The Creator God has joy in His creation. He speaks it into being, He gives it purpose, and He declares it good. When God creates man, He gives him His own name, He gives him His authority, He gives him an abundance of food, speaks purpose into his being, and gives him abundant life. This is where we find Adam.

“And the Lord God formed man of the dust of the ground, and breathed into his nostrils the breath of life; and man became a living being.” [Genesis 2:7]

From dust, God created life, a journey, character and the anticipation of experience. He created man in all his complexity, in the very image of God’s own love and intention. Then, God creates Eden – a home for man to dwell in His presence. Every tree rising from the ground was created to be beautiful, and good for food. Eden was a life-giver; a strong river went out from it, multiplied, and watered many lands – Pishon watered Havilah’s gold, Gihon swept around the land of Cush, Hiddekel travelled to Assyria in the east, and the fourth was called Euphrates. Eden was also Adam’s task – a garden to keep and to tend. It was a place of choice, for man to exercise the authority that God had given him. The Lord God brought all living creatures to Adam to see what He would call them. As God gave life and purpose when He named creation, so Adam had opportunity to speak the same. The Lord waited to see what Adam would call each one He brought to be named, and whatever Adam decided, that became its name. Here was intimacy growing in allowance of choice, in trust and in a working together of God and man. The joy of the Lord was Adam’s joy, the beauty of His creation was shared with man.

God loved Adam, and saw that there was no helper for him, so He formed one whom Adam called “Woman”, and whom he named, “Eve”. He called her “mother of all living”, and so Adam and Eve walked together with God in Eden.

“Then the rib which the Lord God had taken from man He made into a woman, and He brought her to the man.” [Genesis2:22]

Here, a gift of a companionship – not riddled with fear or distrust, but one of fulfilment and of joy. The love of a Father, the anticipation of a Groom, the wonder of a Bride, and the shared joy of all these in the union of Man and Woman.

Only two trees stood aloof and unknown – the tree of life, and the tree of the knowledge of good and evil. Much like all the other trees, they were good for food, and pleasing to the eye. Yet, these were ones of which God had commanded, “Do not eat, for if you do, you will die.” Satan grasped his chance. Death was unknown, a mystery with grave consequences, yet a curiosity that until then, was lost in the captivating light of God’s glory and life. The serpent called the woman and she looked. She responded to his questions and the seed of doubt was sown. It diverted her eyes from God’s beauty, and she tasted the fruit which brought death. Adam ate the fruit from Eve’s hand, and together, they understood sin. The glory of God which clothed them seemed to turn to shame. Disobedience took hold, and blame was spoken instead of love. They used the fig-leaves to clothe themselves, and when God called for His beloved ones, they hid and were ashamed. 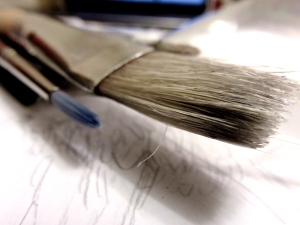 The Lord is just, yet gracious and compassionate. Consequence for sin could not be avoided and the Lord spoke thus to His children. With anger and grief, He spoke out His justice, and removed man from His garden. The joyful tasks He had given them were pierced with the anguish of sin. Yet, pain and suffering could not completely extinguish the glory of God in work, in growth, and in the creation of new life. God in His compassion saw man’s shame, and covered Him with clothes of skin. The first sacrifice was not yet eternal, but God already knew that One would come to clothe man once again with His glory. A Lamb who would be slain, and whose righteousness would wash away man’s shame to clothe Him with identity. Sin’s time of rampaging would be short, for God had already purposed to bring man back to His garden. For now, however, the cherubim wields his sword, which goes every way to protect the tree of life until such time as man is ready.

God has not forgotten Eden’s intimacy. He has not forgotten sin’s cruel deception of man. He looks tenderly at His Beloved even now, as He longs for the return of that dwelling place – where He would be their God, and they would be His people. He cries out to His Beloved to remember who she is, His church to remember her purpose and beauty – a garden enclosed, fragrant and fruitful, a fountain and a stream to deliver life to all creatures and lands [Song of Songs 4:12-15]. He expresses His anger as His vineyard despises Him – sprouting oppression instead of justice, and ignorance instead of righteousness [Isaiah 5]. He holds the water of life in His cup, and He commands the rivers of living water – Eden’s flow. “Come,” He says. “Come to the waters of life, the waters of abundance which spring up like a fountain into eternal life.” [Isaiah 55:1-2, John 4:14] He gives a glimpse of restoration – pure waters flowing from His Holy throne, and the tree of life on either side, bearing its fruit for the healing of the nations, freedom from the curse of sin [Revelation 22:1-3].

I asked the Lord to show me Eden, to show me the beauty of what He had created. He opened my eyes to the emotion of Eden – not wasted, but restored; not destroyed but created in hope. Eden is a garden of beauty, a garden of intimacy, a garden of identity, of partnership with God, of hope and of restoration. It carries the dark memory of sin, but births the vibrancy of hope in Christ’s salvation. It speaks of promise, and of God’s tender mercies. It speaks of redemption and of intimacy with our Lord. Come into my garden, blow upon my garden, O God.