If you were running away from God, where would you hide? Jonah chooses Tarshish, which scholars note to be the furthest place from where God had called Jonah to go. He found a ship, paid the fare and hopped on, intending to flee from the presence of God. The Bible is clear that God knew exactly what was happening, for He sent a storm upon the ship which was so strong that the ship was in danger of breaking apart. While all the seamen were afraid and crying out to their Gods, Jonah was fast asleep and had to be woken by the captain. When the men drew lots, Jonah was selected. He told them what had happened; that the storm was a consequence of his running from God. Jonah suggested he be thrown overboard and when he was, the storm ceased and the men worshipped God.

What do we learn from this segment in Jonah’s journey? I am reminded of the following things.

God told Jonah to go to Nineveh, and He didn’t give up just because Jonah disobeyed. God could have sent someone else, or He could have delivered the message to the people of Nineveh Himself, but He didn’t. His message of grace was not just for Nineveh; it was also for Jonah, and God had some things to teach His prophet. Running from God will not cause Him to change His mind about calling us. [Jeremiah 29:11] says,

“”For I know the plans I have for you,” declares the Lord, “plans for welfare and not for evil, to give you a future and a hope.””

God’s plans for us are always good, even when we think we disagree. We have free will, but God in His goodness, always calls us according to His good plans. We can choose to disobey, but we cannot force God to change our calling. He has already called us, and He waits for us to respond.

2. We can choose to run from God, but we cannot hide from Him.

I wonder what Jonah was thinking when he got on that ship. Surely he would have known God’s omnipresence. Perhaps it was an act of defiance that Jonah chose to run towards Tarshish. [Psalm 139:7-9] says,

We cannot hide from God. He knows our plans, He knows our heart, and He knows us. Yet this is not something we should be afraid of. When caught in the storm, Jonah declares that he is a Hebrew, and that he fears “..the Lord, the God of heaven, who made the sea and the dry land.” [Jonah 1:9]. How do we respond to God who has made all things and knows all things? I believe there is a peace that comes when we fear God in reverence and surrender to Him. When we do this, our mindset places greater emphasis on allowing God to move, and less emphasis on our trying to do things ourselves. God always knows best, and He is always good, so why not entrust our lives to Him who knows all and who loves all.

3. God’s glory remains, even if we are oblivious to it.

The captain who woke Jonah must have been shocked by how Jonah could sleep through such a great storm. Everyone else saw the storm, even though they did not know its cause. It reminds me of how we can be oblivious to God’s promptings when we disobey, how we sometimes need someone else to help us see that God is saying. God speaks in so many ways – through the church, through nature, even through those who do not know him. His glory remains, even when we do not recognise it. [Psalm 19:1-2] says,

“The heavens declare the glory of God, and the sky above proclaims his handiwork. Day to day pours out speech, and night to night reveals knowledge.”

Furthermore, the Bible gives us instruction to stay alert and keep watch. If we look around and pay attention, we can see God moving in every aspect of life. It is incredible to see the working of His spirit – guiding a conversation, healing a relationship rift, making the sun rise each morning, giving the ocean its tides.

“For you are all children of light, children of the day. We are not of the night or of the darkness. So then let us not sleep, as others do, but let us keep awake and be sober.” – [1 Thessalonians 5:5-6]

4. God can use even our disobedience for His glory.

In the midst of the storm, the other men on Jonah’s ship prayed, each to his own God. Yet because of Jonah, they recognised the power of the Hebrew God. [Jonah 1:15-16] says that when the men threw Jonah into the sea, and the storm ceased, they “feared the Lord exceedingly, and offered a sacrifice to the Lord and took vows.” Even when Jonah was fleeing from the presence of God, he was still able to be used for the glory of God. [Colossians 1:16] also tells us that all things have been made through God and for God. So, whether we are obedient or disobedient, God continues to work. He does not change, but He gives us the opportunity to participate in what He is doing. Wouldn’t it be better for us to take up that opportunity in obedience? 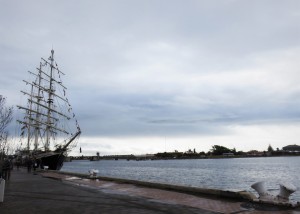 When I look at what happened with Jonah on the ship, I see a need for surrender. We can run, disobey, sleep or try to ignore God, but His presence cannot be erased and He will continue to pursue us with His love, His grace, and His second chances. With a God so great, and one we know is always good, it makes sense that we should trust Him and surrender ourselves and our lives completely to Him.

One thought on “A Jonah Journey P2: Hideout on the Ship”