Esau and Jacob – Esau was careless, Jacob was deceitful. Both fathered nations, both were blessed, but Jacob inherited the Lord’s promise. Why Jacob and not Esau, who was the firstborn? The Lord says, “Jacob I loved, but Esau I hated.” [Romans 9:13] What is it that the Lord hated in Esau?

“Two nations are in your womb, and two peoples from within you will be separated; one people will be stronger than the other, and the older will serve the younger.” [Genesis 25:23]

When Rebekah became pregnant by Isaac, she felt her babies jostling inside her womb and went to inquire of the Lord. God gave her this revelation and this prophesy –

All these things came true.

Even before the birth of Esau and Jacob, God knew what was to come. “All the days ordained for me were written in your book before one of them came to be” [Psalm 139:16] 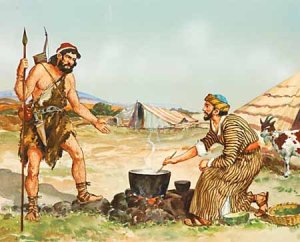 “ Once when Jacob was cooking some stew, Esau came in from the open country, famished. He said to Jacob, “Quick, let me have some of that red stew! I’m famished!” (That is why he was also called Edom.)

“Look, I am about to die,” Esau said. “What good is the birthright to me?”

But Jacob said, “Swear to me first.” So he swore an oath to him, selling his birthright to Jacob.

Then Jacob gave Esau some bread and some lentil stew. He ate and drank, and then got up and left.

When Esau despises his birthright, he reveals his attitude and heart.

1. Esau chooses to eat a meal over keeping his birthright.

Esau chases after things of this earth, temporary things, rather than looking toward heavenly things, and desiring fullness in God. Matthew 6: 19-21 says, “Do not store up for yourselves treasures on earth, where moth and rust destroy, and where thieves break in and steal. But store up for yourselves treasures in heaven, where moth and rust do not destroy, and where thieves do not break in and steal. For where your treasure is, there your heart will be also.” Esau traded satisfaction in God for earthly satisfaction and as such, he despised God as his portion.

Jesus says, “Do not work for food that spoils, but for food that endures to eternal life, which the Son of Man will give you.” [John 6:27] To work for or live for anything other than God is idolatry. To place any need, want, desire, action, person or vision before God is idolatry.  Who can compare to God? Who can be His equal? [Isaiah 40:25] So, what is our response to God who is our portion?

[Psalm 27:4] “One thing I ask of the Lord, this is what I seek: that I may dwell in the house of the Lord all the days of my life, to gaze upon the beauty of the Lord and to seek him in his temple.”

[Luke 10:41-42]  “Martha, Martha,” the Lord answered. “You are worried and upset about many things, but only one thing is needed. Mary has chosen what is better, and it will not be taken away from her.”

[Matthew 6:31-33] “So do not worry, saying, ‘What shall we eat?’ or ‘What shall we wear?’ For the pagans run after these things, and your heavenly father knows that you need them. But seek first his kingdom and his righteousness, and all these things will be given to you as well.”

One thing is needed. That is, to dwell in the house of the Lord, to sit at Jesus’ feet, to seek first his kingdom and righteousness, all of which express this one necessary thing – to pursue fullness in relationship with Jesus, with God.[Philippians 3:7-8]

This sentence carries a heart of selfishness and carelessness. Selfishness because Esau only thinks about the significance of the birthright to himself, and moreover, its significance in that particular moment; carelessness because in that moment, he abandons his responsibility as heir, protector and provider of his father’s house. Esau even swears an oath, selling his birthright to Jacob. In Hebrew, the word used for ‘swear’ is שָׁבַע (shaba) meaning ‘to give one’s sacred unbreakable word in testimony that the one swearing would faithfully perform some promised deed’[1]. Swearing an oath was no small matter. It had future implications and was a solemn pledge. Esau could not have sworn this oath lightly.

Once again, we consider what it is that Esau is selling. He is to be steward of all his father has – people, possessions, land. He is to be a shepherd for his father’s flock. The Lord speaks a warning about stewards of His possessions and shepherds of His flock:

In selling his birthright, Esau shows himself to be untrustworthy with what has been given to him, and a selfish shepherd of his father’s people.

Now Esau was famished and felt as if he was about to die. To sell his birthright for life, was that a reasonable excuse? No! Because God is his life and his portion, and his birthright carried the inheritance of covenant relationship with God. Paul declares, “But whatever was to my profit I now consider loss for the sake of Christ. What is more, I consider everything a loss compared to the surpassing greatness of knowing Christ Jesus my Lord, for whose sake I have lost all things. I consider them rubbish that I may gain Christ” Esau chose self over God, and that cost him more that his literal birthright; it lost him the Lord’s promise and covenant blessing with Israel.

“So in Christ Jesus you are all children of God through faith, for all of you who were baptized into Christ have clothed yourselves with Christ. There is neither Jew nor Gentile, neither slave nor free, nor is there male and female, for you are all one in Christ Jesus. If you belong to Christ, then you are Abraham’s seed, and heirs according to the promise.” [Galatians 3:26-29]

In Christ, we partake in the promises God gives Abraham. Since we are heirs, these promises are our birthright. We live as disciples of Christ when we daily take up our cross, deny ourselves and follow Him [Luke 9:23]. As heirs, we must beware the spirit of Esau which God hates [Malachi 1:3, Romans 9:13]. This is how the spirit of Esau manifests:

If we are to honour God and be heirs of his promise, we must live our lives with our hearts and our minds set on things above, not on earthly things [Colossians 3:1-2]. It was too late for Esau when he realised Jacob has received Isaac’s blessing. Though he wept aloud and petitioned his father Isaac, there was no blessing to be given to Esau for he had sold his birthright, and his blessing along with it [Genesis 27:30-40]. This is a warning to us to be prepared for the second coming of Jesus and the establishment of God’s kingdom in all its glory. Let us not be like Esau, who sold his inheritance, nor like the man who did not wear wedding clothes at the wedding banquet [22:1-14], nor like the foolish virgins who lacked oil when the bridegroom arrived [Matthew 25:1-13], nor like those who say, “Lord, Lord” but did not do the will of the Father in heaven [Matthew 7:21-23]. Instead, let us be steadfast in the Lord and if we perish, we perish [Esther 4:16]. After all, our lives on earth are short, our days like a fleeting shadow [Psalm 144:4] but in our suffering, we can remember that our reward is in heaven! [Matthew 5:11-12]

“Therefore, my dear brothers, stand firm. Let nothing move you. Always give yourselves fully to the Lord, because you know that your labour in the Lord is not in vain.”  [1 Corinthians 15:58]