The walls of my room are getting a little make-over. I have been taking down what has accumulated of many years spent snuggling up in blankets, early morning sketches, and middle of the night revelations. The walls have the usual postcards and photos, but there are also many drawings. I’m not the best artist (hence why the pictures are all in my room) but I can draw enough to capture, in part, some of the things I see when I speak to God. I put the pictures in my room to remind myself of these things. They also help me memorise and hide God’s word in my heart.

Most of the pictures have verses on them, but there are some which tell of a testimony, or revelation of God. As I was taking the pictures down, I realised how often I seemed to draw myself with God. I used to tell people it was just a generic person I had drawn wrapped up in God’s arms but the truth is, they all look like me, probably because I had drawn them all in relation to how I saw my own relationship with God. I noticed something similar throughout all these pictures – every picture featured both me and God in close proximity and His arm was always around me, a gentle look of love upon His face. He could be showing me something, looking at me, dancing with me, or just holding me, but it was always the two of us, my eyes were upturned and my lips carefully sketched in joyful exuberance. It made me think about a few things – some things I knew, some things I was still learning, and a challenge to grow.

The God I know.

I know my identity as God’s beloved, His daughter, His bride and the one whom He loves .I see Him clearly are my Father, my Friend, my Teacher and my Bridegroom Lover. I know he protects me, and lavishes His gifts upon me, that I can never be taken out of His hand. I see Him constantly and I know He is with me. These are the experiences I talk about often, the pictures I so often share. It is because these characteristics of God that, while I still grow in them everyday, are so familiar to me. Here is an example of what I see when I picture myself and Jesus: https://lostnowfoundk.wordpress.com/2013/07/20/picturing-jesus/

What I have not yet seen.

There are still aspects of God that I do not know much of, or that I am still learning about. The fear of the Lord is something I have looked into often, yet something I still wonder about. I fear God in that I hold His commands in high regard, yet at the same time, I know He loves me and I trust Him to help keep my in His way. I know the discipline of the Lord but I see His kindness and gentleness in rebuke. One thing I have never really imagined is God’s anger. I know He gets angry – it is mentioned several times in the Bible and there are consequences.

I want to know all of God’s heart, all of His character, so why should I not also understand the purpose of His holy anger? King David knew God’s anger. He writes in Psalm 38, “O Lord, do not rebuke me in Your wrath, nor chasten me in Your hot displeasure! For Your arrows pierce me deeply, and You hand presses me down.” Yet, as he cries out to God, He declares His knowledge of God – “For in You, O Lord I hope; You will hear, O Lord my God … Do no forsake me, O Lord; O my God, be not far from me! Make haste to help me, O Lord my salvation.” 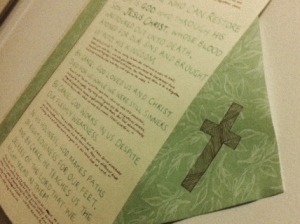 If God was angry with men like Moses, and David, should there not be times when we anger Him now? Is He is not angered by the acts of atrocity committed by nations? I’m still probably unlikely to draw pictures of God’s anger, but knowing God’s anger gives revelation of the following things:

I draw pictures that encourage myself in the Lord, and looking at all the pictures, I wondered if I could bless others more with this. I have occasionally drawn things for others but, as my artwork is not exactly professional, it is a rare occurrence. However, if I can speak prophetic words, or sing a prophetic song, could I not also draw prophetic pictures to encourage people in the Lord?

I haven’t spoken about prophecy here at all, but it is a journey I have been through and a gift I am still growing in. During my surgical rotation earlier this year, I met someone who challenged whether prophecy was relevant in the modern day. Over that next week, I put together all the things God had taught me thus far about prophecy. You can read about it in the attached document: 2014 The Holy Spirit and Gifts of the Spirit

Another resource I found very useful when learning to steward the gift of prophecy was Mike Bickle’s book “Growing in the Prophetic”. It is available as a free PDF online, or you can order a hardcopy.