Back in the days of the Constantine’s Roman Empire, martyrdom was held in high regard. Persecution of Christians was widespread, yet the thrill of martyrdom swept through the community. Some Christians began actively seeking out martyrdom, deeming it to be a glorious prize. They demanded to be killed and some even committed various acts of aggression and disrespect in the public so that their request to die would come to pass. This stemmed from the assurance that martyrs would receive complete absolution, and be guaranteed to enter heaven immediately. It was an apocalyptic mindset, later labelled “the cult of martyrs”. One story tells that even the proconsul tired of the farce, sending would-be martyrs away with the advice that rope and cliffs were in bountiful supply to aid their request. In this time, martyrdom, and the concept of suffering for God’s glory was greatly misunderstood.

There is difference between enduring suffering, and seeking suffering for self-glorification, suffering with victim mentality and being certain of our hope in Christ. We are all likely to face suffering in one form or another – the loss of a dear friend, a physical ailment, strained relationships or stress at work for example. Then there is suffering when someone is reprimanded for breaking the law, or when someone is ostracized for a certain belief or way of thinking. People see strength in those who overcome suffering, and strength in those who manage to persevere through it. How we respond to our suffering and overcome is important too. Children from abusive families are more likely to themselves abuse others, but more likely is not always. Some people hold grudges and wait for revenge (just look at the news, or watch a couple of movies). Some people declare forgiveness but waste away in their own sorrow. People deal with suffering in different ways.

How do we deal with suffering as Christians? Last week, we mentioned a couple of verses which spoke about suffering. Here they are again:

“Yes, and all who desire to live godly in Christ Jesus will suffer persecution.” [2 Timothy 3:12]

“And not only that, but we also glory in tribulations, knowing that tribulation produces perseverance; and perseverance character, and character, hope. Now hope does not disappoint, because the love of God has been poured out in our hearts by the Holy Spirit who was given to us.” [Romans 5:3-5]

As Christians, pursuing a godly lifestyle, we can expect to face suffering and persecution. However, to experience suffering is also a blessing as it builds us in godly character. 1 Peter spends a good amount of time talking about suffering so let’s learn some wisdom from these passages in God’s word.

Reading through 1 Peter, I have picked out few points about suffering for God’s glory.

Before we get what this all means practically, it is important to know the context of this suffering. 1 Peter 4:15 says, “But let none of you suffer as a murderer, a thief, an evildoer, or as a busy body in other people’s matters.” These things are not aligned with the will of God and if we suffer for doing wrong, we should repent and turn from doing those things. “If My people who are called by My name will humble themselves, and pray and seek My face, and turn from their wicked ways, then I will hear from heaven, and will forgive their sin and heal their land.” [2 Chronicles 7:14] Sin separates us from God. We all sin, and in the Bible, we see the consequence of sin – Moses did not get to enter the promised land, Saul’s kingdom was taken away from Him, David was rebuked by the prophet Samuel and his first child with Bathsheba died. However, we also see the grace of God towards those to repent and turn from their ways – Moses did get to see the promised land, and David’s second son by Bathsheba reigned as king after him. The lesson is this – when we suffer for doing wrong, turn to God and cry out to Him in repentance. God will hear, forgive or sins and cover us with His grace.

Now, what about suffering for what is right?
Let’s look at a few verses from 1 Peter:

“And who is he who will harm you if you become followers of what is good? But even if you should suffer for righteousness’ sake, you are blessed, ‘And do not be afraid of their threats nor be troubled.” [1 Peter 3:13-14]

“Beloved, do not think it strange concerning the fiery trial which is to try you, as though some strange thing happened to you;” [1 Peter 4:12]

Testimony and Ministers of God’s Glory

“But sanctify the Lord God in your hearts, and always be ready to give a defense to everyone who asks you a reason for the hope that is in you, with meekness and fear; having a good conscience, that when they defame you as evildoers, those who revile your good conduct in Christ may be ashamed.” [1 Peter 3:15-17]

We put the Lord God first in our hearts

“But rejoice to the extent that you partake of Christ’s sufferings, that when His glory is revealed, you may also be glad with exceeding joy. If you are reproached for the name of Christ, blessed are you, for the Spirit of glory and of God rests upon you. On their part He is blasphemed, but on your part He is glorified.” [ 1 Peter 4:13-14]

“Therefore let those who suffer according to the will of God commit their souls to Him in doing good, as to a faithful Creator.” [1 Peter 4:19]

Having the Same Mind as Christ

“Therefore, since Christ suffered for us in the flesh, arm yourselves also with the same mind, for he who has suffered in the flesh has ceased from sin, that he no longer should live the rest of his time in the flesh for the lusts of men, but for the will of God.” [1 Peter 4:1-2]

Jesus Christ truly is our perfect example. When I think of my Saviour, I remember how much He suffered, yet how glorious His triumph. God chose to suffer in the flesh, to experience the weakness of pain, the torment of rejection as His beloved people despised Him. Yet, Christ did not falter in fulfilling His purpose. He overcame and became He overcame, we can overcome. 1 Peter 3:18-22 tells us about the mind of Christ which we should arm ourselves with:

“For Christ also suffered once for sins, the just for the unjust, that He might bring us to God, being put to death in the flesh but made alive by the Spirit, by whom also He went and preached to the spirits in prison, who formerly were disobedient, when once the Divine longsuffering waited in the days of Noah, while the ark was being prepared, in which a few, that is, eight souls, were saved through water. There is also an antitype which now saves us – baptism (not the removal of the filth of the flesh, but the answer of a good conscience toward God), through the resurrection of Jesus Christ.”

The NKJV as recorded above is a bit more complicated than the NIV version which simply states that the spirit of God made proclamation to the imprisoned spirits – those disobedient during Noah’s days when God waited patiently before sending the flood. At that time, eight people were saved through water, a symbol of baptism which also saves us now. The passage explains this baptism as the pledge of a clear conscience, or a promise to live holy to God. It saves us because we put our hope in the resurrection of Christ and therefore, we share in His eternal life and glory.

So then, what does it mean to have the same mind as Christ? We cease from sin, living for the will of God rather than for the lusts of men. Philippians 2:3-7 is another passage I think of which mentions the mind of Christ. This reminds me that the mind of Christ is also humility, looking to God first, and loving others selflessly.

“Let nothing be done through selfish ambition or conceit, but in lowliness of mind let each esteem others better than himself. Let each of you look out not only for his own interests, but also for the interests of others. Let this mind be in you which was also in Christ Jesus, who, being in the form of God did not consider it robbery to be equal with God, but made Himself of no reputation, taking the form of a bondservant, and coming in the likeness of man.” 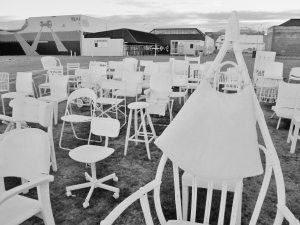 I do not think we should look to suffer purposely. However, I also think that we should not avoid suffering if it does come our way. Instead, we should learn to deal with it according to the will of God. We strive to live lives holy to God and when we fall, we face the consequences but repent, and turn away from sin. When we suffer for doing good, we remember the authority of God, our identity as heirs of Christ’s inheritance, and stand firm in our hope, hope in the resurrection of Christ Jesus so that His Name would be glorified. We have not mentioned this extensively, but we also have a role in supporting one another through suffering – “And if one member suffers, all the members suffer with it; or if one member is honoured, all the members rejoice with it.” [1 Corinthians 12:26] At the same time, we each carry our own load – “But let each one examine his own work, and then he will have rejoicing in himself alone, and not in another. For each one shall bear his own load.” [Galatians 6:4-5] Worship, prayer and fellowship – these three things are foundational to our walk with God and with these, even in times of suffering, we can persevere and rejoice in Christ.

One thought on “1 Peter P5 – Suffering in the Right Perspective”