Abraham journeyed a fair distance from his hometown of Ur in Chaldea. Drawing it all on a map, I found it interesting to see where he went in relation to other significant Biblical sites – Ninevah where Jonah spoke God’s word, Mt Ararat where Noah’s ark rested, Jericho which fell at the hands of Israel, Goshen where the Israelites settled and were enslaved in Egypt. In fact, Abraham’s hometown of Ur is close to where the Tower of Babel may have been built. During his travels, Abraham experienced the goodness of God in many ways- he heard promises, received the fulfillment of promises, was tested in faith, and blessed. As a testimony to the Lord of his life, Abraham built altars and worshipped at many significant places. Four of these places are specifically mentioned in the Biblical record of Abraham’s journey. 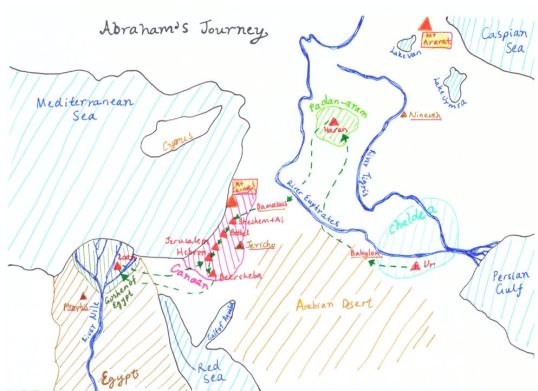 Shortly after God calls Abraham to leave his homeland, He reiterates His promise of land. Abraham has arrived at Shechem of Canaan, at the terebinth tree of Moreh when God says, “…To your descendants I will give this land…” [Genesis 12:7]

In response, Abraham builds an altar – “… to the Lord, who had appeared to Him.” Journeying on just a little further to the city of Ai, Abraham stops to build another altar and “…call[s] on the name of the Lord.” When God gives us a promise, we need to do three things, just as Abraham did.

1) Embrace the word of God through worship – We believe the word, declare the word, and trust that God’s word accomplishes all He purposes for it.

2) Walk in the promise – This requires obedience, and perseverance to continue living in faith.

3) Call on the Name of God – We cannot make God’s promises come true by our own strength. We need to surrender to His leading, and trust in His strength.

This altar was built, once again, to worship the Lord and acknowledge His word of promise. Lot had chosen the land of the east to be his, and the Lord now spoke to Abraham saying “… all the land which you see I give to you and your descendants forever…” [Genesis 13:15] This was not a new promise, but it was one of many reminders God gave to Abraham about what He had planned for his life and legacy. However many times God spoke his promise, Abraham believed and took hold of it.

Do we know what God has promised for our lives? Do we stop to praise Him, and acknowledge His goodness when He reminds us? Are we disengaged, too busy to hear, or have we lost faith in God’s word?  Let us not lose hope for, as Hebrews 10:23 says, “Let us hold fast the confession of our hope without wavering, for He who promised is faithful.”

“Then Abraham planted a tamarisk tree in Beersheba, and there called on the name of the Lord, the Everlasting God.” [Genesis 21:33]

Beersheba was named for a covenant made in that place between Abraham and Abimelech. A dispute involving a well dug by Abraham but seized by Abimelech’s servants, was settled by the two men. Amongst other things, Abraham gave Abimelech seven ewe lambs, set apart from the flock. These, Abraham said, would be witness that he had dug the well. Thus, Beersheba was aptly named, meaning “Well of the Oath” or “Well of the Seven”.

Here, Abraham creates a different altar. He plants a tree to grow, propagate and flower through many years to come.  Tamarisk trees, with their dense foliage, have been used for shade, and as windbreaks. Also known as salt cedars, their roots stretch deep underground, harvesting salt in the soil and presenting it on the surface of its leaves.

Trees, and salt are referred to many times in the Bible. Faith is compared to a mustard seed, which although small, grows into a large tree in which the birds can nest [Matthew 13:32]. We are called to be the salt of the earth, to season the earth with the grace of God as seen through us [Matthew 5:13]. As we grow in faith and character, we can remember to call upon the name of our Everlasting God. There is a time to cultivate the “salt” in our own lives (our relationship with God), and a time to “flower” (our witness to the world). The tamarisk tree reminds us that while seasons of experience may come and go, God our Lord remains everlasting forever.

This was perhaps the hardest altar for Abraham to build. It was on this altar that he was going to sacrifice of son of God’s promise to him – Isaac, the son born through a miracle to Sarah and himself in their old age. God had said Isaac would inherit Abraham’s promises. Yet now, Abraham was readying himself to sacrifice his son to the Lord who had given him life. Hebrews 11:17-19 describes Abraham’s faith in this moment.

“By faith Abraham, when he was tested, offered up Isaac, and he who had received the promises offered up his only begotten son, of whom it was said, ‘In Isaac your seed shall be called,’ concluding that God was able to raise him up, even from the dead, from which he also received him in a figurative sense.”

As the Bible records, Isaac does not die on the altar. The Angel of the Lord calls Abraham, commends his faith and shows him to a ram, which he uses to sacrifice instead. As a witness to His encounter with God in this place, Abraham names the site “The-Lord-Will-Provide.”

I think we can learn something about worship from Abraham’s altars. As we follow his journey, I see a trend in when and where the Bible points out an altar.

Let us journey with the Lord, and built altars to remember His Name – our faithful God, our lover, our friend, our guide. Let us build testimony so that we can look back and see how far the Lord has carried us. Let us build faith as we trust in God’s promises. Let us build life with God, our Lord, as we grow to know Him more!