Q: What do Ishmael, Esau and Reuben all have in common?
A: They were all firstborns who did not receive their allotted inheritance.

The Bible makes mention of many firstborns, most notably Christ – firstborn in His family, firstborn of all creation, and firstborn from the dead. It also tells the stories of many other firstborns who failed to receive their inheritance for various reasons – Ishmael, Esau, and Reuben for example. In fact, there are also many “last-borns” who received a first-born inheritance – Jacob, Joseph, David, Solomon. Matthew 20:6 says, “So the last will be first, and the first last. For many are called, but few chosen.” I am a first-born child myself, and while I want to have an unmovable confidence in Christ, I also want to pursue humility in all I do.

Exodus 13:2 describes how God sanctifies the firstborn: “Consecrate to Me all the firstborn, whatever opens the womb among the children of Israel, both of man and beast; it is Mine.” The Bible tells us we are heirs of the firstborn inheritance through Christ. It also gives us many examples of how those who were entitled to such an inheritance lost their right to it.

This week, I want to look at the choices and situations of three firstborns who lost their inheritance – Ishmael, Esau, and Reuben. Next time, we will look into Jesus as the firstborn in His family, the firstborn over all creation, and the firstborn from the dead.

Ishmael was Abraham’s firstborn, but he was not the recipient of God’s promise to Abraham. His story was a result of a decision made by his father Abraham, which was not in line with God’s word. Ishmael shows us that familial sin has consequences, but that God remains merciful.

God had told Abraham that his descendants would come through a child born to himself and Sarah, his wife. However, this child, Isaac, was not born for some time. Taking things into her own hands, Sarah suggested that Abraham sleep with her maid, Hagar, in order to obtain a son. Abraham agreed, and when God reminded him of what he had promised, Abraham said,

God then emphasises his word to Abraham once again, while also showing his mercy in the situation. He says:

“… No, Sarah your wife shall bear you a son, and you shall call his name Isaac; I will establish My covenant with him for an everlasting covenant, and with his descendants after him. And as for Ishmael, I have heard you. Behold, I have blessed him, and will make him fruitful, and will multiply him exceedingly. He shall beget twelve princes, and I will make him a great nation.” – [Genesis 17:19-20] 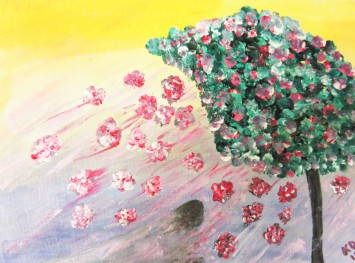 The Arabs are descended from Ishmael, and the Jews descended from Isaac. Throughout history, these two peoples have been at war with one another. While there are many reasons for this, one reason seems to stem from the origin of the Jews and Arabs – that is, Abraham’s decision to sleep with Hagar. God blesses Ishmael in that he is the father of a great nation. However, it is through Isaac, and through Israel that his promises are fulfilled.

It was not Hagar’s choice to be despised by her mistress, or to be sent away from Abraham. However, in these moments of injustice, Hagar makes her own choice – she calls on the Name of the Lord, saying, “You-Are-the-God-Who-Sees” [Genesis 16:13]. God speaks to her, names Ishmael, and assures her that he will be blessed. As children of God, we are recipients of his promises. Familial sin, and the sin of others can have consequences that affect our own walk with the Lord. However, in such circumstances, we can remember that God is merciful.

Like the story of Ishmael and Isaac, Esau and Jacob father two nations which remain in constant conflict. God pre-empted this struggle between brothers when Rebekah, Isaac’s wife, came before Him.

“Two nations are in your womb,
Two peoples shall be separated from your body;
One people shall be stronger than the other,
And the older shall serve the younger.”
– [Genesis 25:23]

As the Bible then proceeds to tell us, Esau sells his birthright to younger brother Jacob for a bowl of stew. It was a moment of hunger that had momentous consequences. Deceiving Jacob later tricks his father into blessing him, so that there is no blessing left for Esau despite his weeping. For this, Esau blames his brother.

“… is he not rightly named Jacob? For he has supplanted me these two times. He took away my birthright, and now look, he has taken away my blessing! … Have you not reserved a blessing for me?” – [Genesis 27:36]

The story of Esau reminds us to honour and guard our heavenly birthright. While Jacob was deceitful in his ways, Esau  was careless in his.

1 Peter 5:8 tells us to “Be sober, be vigilant; because your adversary the devil walks about like a roaring lion, seeking whom he may devour.” Our faith is our heavenly birthright which guarantees our right to share in God’s eternal inheritance as co-heirs with Christ. Let us keep watch and have strength to resist temptation and sin. Le us guard our faith, and our testimony, carefully.

Reuben teaches us that righteousness is not from ourselves, but that it comes from Christ. Of Jacob’s twelve sons, it is Judah, the fourth in line, who ultimately receives the inheritance. Jesus, the Messiah, is born through Judah’s family line. Reuben was disqualified for sleeping with his father’s concubine. His brothers, Levi and Simeon were also disqualified for their needless violence (they destroyed a city after speaking with them deceitfully in revenge for their sister, Dinah’s rape). Judah is not without sin, but ends up inheriting the birthright. His redemption in becoming a descendent of the Messiah is another story in itself.

There were times when Reuben showed responsibility as a firstborn – his attempt to save Joseph’s life when the rest of his brothers planned to kill him, and his plea to his father Jacob, to let Benjamin go with them to Egypt. However, when the time came for Jacob to bless his sons, he says to Reuben,

“Reuben, you are my firstborn,
My might and the beginning of my strength,
The excellency of dignity and the excellency of power.
Unstable as water, you shall not excel,
Because you went up to your father’s bed;
Then you defiled it –
He went up to my couch.”
– [Genesis 49:3-4]

Reuben had potential, but it was ruined by this sin. The Bible tells us that God desires holiness. He calls us to be holy just as he is holy.

“…as obedient children, not conforming yourselves to the former lusts, as in your ignorance; but as He who called you is holy, you also be holy in all your conduct, because it is written, “be holy, for I am holy.”” – [1 Peter 11:14-16]

Reuben, with one act of sin, dishonoured his father, and relinquished his birthright. However, Christ redeems humanity’s birthright with his grace, shown on the cross. Let us honour our heavenly Father by submitting to His ways. When we do this, we are covered by the garment of Jesus’ righteousness [Romans 13:14, 2 Corinthians 5:21].

Because of sin, we are not worthy to receive the birthright that gives us inheritance of God’s kingdom. However, through Christ Jesus, this birthright is redeemed and we become sons of God, co-heirs with Christ in God’s eternity. Our inheritance is guaranteed by the Holy Spirit who makes Christ known to us, and Christ reveals to us, the Father.

“But when the fullness of time had come, God sent forth His Son, born of a woman, born under the law, to redeem those who were under the law, that we might receive the adoption as sons. And because you are sons, God has sent forth the Spirit of His Son into your hearts, crying out ‘Abba Father!’ Therefore you are no longer a slave but a son, and if a son, then an heir of God through Christ.” – [Galatians 4:4-7]